On Valentine’s Day it was announced that Aston Villa have appointed Tim Sherwood to be their new manager, signing a contract until the end of the 2017/18 season. This appointment has received a mixed response from pundits and Villa fans alike, with the general consensus being that it is at best a massive gamble by the club.

In many ways, however, Sherwood’s appointment as Villa manager makes a lot of sense. Although he has limited experience, he has shown some evidence that he is the right man to address The Villan’s deficiencies and build on what strengths the club already possess.

The first and most obvious problem that the new Villa manager must address is their lack of goals. Twelve goals in twenty-five league games is asking for relegation, especially when you consider that it means that in an average league game an opponent only needs to score once to defeat the Midlands club, and a team at the foot of the table can never really be relied on to keep clean sheets.

Given his record as manager of Tottenham Hotspur, it would not be too farfetched to suggest that Sherwood has the ability to improve Aston Villa’s goal output. During his (admittedly short) stint as Spurs boss during the latter half of last season his side to scored an average of 1.9 goals per game in the league. This was a vast improvement from Andre Villas Boas’s record during the first half of the same season where Spurs only managed to average 1.0 goals a game.

When one delves deeper into Spurs’ attacking statistics under Sherwood, one finds more cause for optimism for his Villa reign. A massive part of Aston Villa’s goal shortage is their utterly shocking chance conversion ratio, which is the second worst in all the major leagues in Europe. Under Sherwood, Spurs had the best chance conversion ratio in the Premier League, indicating that if anyone can get Villa’s attackers firing, it is he.

A large factor as to why Tottenham Hotspur’s scoring rate almost doubled between the reigns of Villas Boas and that of Sherwood last season was the rejuvenation of Emmanuel Adebayor under the latter manager. Having been frozen out during the first half of the season, the Togolese striker returned to score 10 goals in 20 league appearances. Adebayor himself acknowledged that his return to form owed much to Sherwood’s influence, as can be shown through both his famous salute of the manager after a goal against Sunderland, and his public vocal support of the manager to keep his position beyond the end of the 2013/14 season.

Aston Villa fans will certainly be hoping that Sherwood can have a similar effect on their out of form striker Christian Benteke as he had on Adebayor at Spurs. The Belgian striker has only scored two league goals all season but, like Adebayor, can be unplayable when confident and on form. Villa’s potential to ascend from danger will surely rest heavily on whether Benteke can get back amongst the goals, and, as has been stated, there is good evidence to suggest that Sherwood can be the man to bring him back to his best.

It is Sherwood’s ability to instil confidence in players, particularly attacking players, which may well ensure that his appointment is a gamble that will pay off. Villa’s lack of goals can be attributed to their midfielders and attackers always choosing the safe option rather than attempting a run or killer pass. This lack of creativity has been further highlighted with the recent introduction to the team of exciting playmaker Carles Gil. Gil’s adventurous and creative play bears a stark contrast to all of his new teammates, quite possibly because he has not been a part of the Villa camp for long enough for the negative atmosphere to drain away his confidence.

Sherwood’s first task as Villa manager will therefore be to give his players the belief and freedom to express themselves on the field. Given the upsurge in form of attacking players such as Adebayor, Gylfi Sigurdsson, Christian Eriksen and Harry Kane during Sherwood’s time as Spurs manager it would seem that he has the capabilities to achieve this.

Although it must be admitted that Sherwood came nowhere near to alleviating Spurs’ mental block against the bigger sides, his former team’s ability to bounce back from humiliations at the hands of Liverpool, Chelsea and Manchester City suggest that he has the motivational skills to overcome the setbacks that will surely occur during a relegation scrap.

Sherwood’s ability to give attacking players more creative freedom may see Villa reaping instant benefits. Though their recent form has been woeful, having not won a league game since early December, they have just finished a very difficult run of fixtures and are entering into a period of winnable games. An injection of confidence, particularly into their attacking players, could therefore see them picking up some momentum into the business end of the season.

Perhaps the biggest reason, however why Sherwood seems a good fit for Aston Villa is his excellent record of working with young players. Sherwood was in charge of the Tottenham Hotspur Under-21 side that reached the final of the first ever Barclays Under-21 Premier League. He should be heavily credited for the large number of young players making an impact at White Hart Lane at the moment, in particular Harry Kane and Nabil Bentaleb, who he personally blooded into the first team during the latter half of last season.

Such ability to bring through younger players is an essential trait for any Aston Villa manager, particularly given owner Randy Lerner’s refusal to inject money into the club’s transfer kitty. The Villan’s have a tradition of youth products making an impact in the first team, and Sherwood could definitely continue this tradition, particularly given Villa’s clear need for fresh legs and minds within the first team.

Sherwood’s ability to work with young talent will also be incredibly important for Villa’s long-term future. With Lerner seemingly looking to offload the club, a young, talented and inexpensively assembled team will attract investors. As well as this, should Villa fan’s nightmares come true and they are relegated, Sherwood has the skills to assemble a new team cheaply, meaning that he is a sensible option as Villa manager as opposed to the gamble that many are making him out to be.

Despite this, many Villa supporters are still dissatisfied with the appointment of Sherwood, with their main gripe being his lack of managerial experience and, more specifically, his lack of experience in guiding teams through relegation battles. Indeed, he does have absolutely no experience in this situation, and that is not ideal, however there is a strong case to be made that such experience is not as important as it seems, particularly given how this particular campaign is panning out at the bottom of the table.

First of all, one must look at the managers of the teams around them, and compare what experience they have to that of Sherwood. Indeed, Tony Ferndandes’s ‘dream manager’ at QPR has no head management experience in football, Sean Dyche is in first season of Premier League management and, given his recent indiscretions, the more experienced Nigel Pearson appears to be losing the plot at Leicester. In addition to this, relegation “specialist” Harry “Houdini” Redknapp’s recent work at QPR must beg the question of whether experience is really as valuable as people it make out to be.

An interesting contrast can also be made between the managerial appointments of Villa and their Midland rivals West Bromwich Albion, who recently appointed Tony Pulis as the man to lead them to safety. Such an appointment could not be in a more different vein to that of Sherwood’s at Villa. Pulis is certainly a relegation specialist, as can be shown through his miracle work last season at Crystal Palace. To see West Brom getting relegated under his leadership would be unpredictable to say the least.

However there are also some major drawbacks of West Brom’s new managerial appointment. It is unlikely that Pulis will stay at the club in the long term, particularly given their “continental” management structure which sees Pulis having no real control over transfers, this being the reason why he left Crystal Palace at the start of the season. Sherwood, on the other hand, seems to have been appointed for his ability to develop a team gradually, and the Aston Villa board’s hopes will surely be that they already possess the personnel to achieve their short term goal of safety, so long as they have the required confidence. 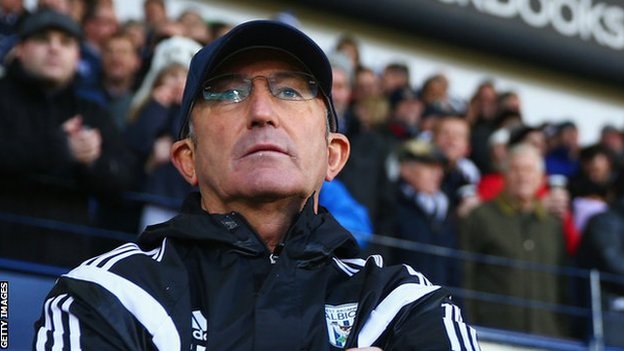 This type of long termism in the face of adversity is all too rare in football and should be respected, even if it is not necessarily rewarded.

A second problem that Villa fans may have with Sherwood revolves around his media handling style, which can be very aggressive at times. During his spell in charge of Spurs he publicly criticised his players and at times resembled a stroppy teenager at press conferences. A worry for Villa fans could be that if he continues this eccentric media style and results do not improve then the Birmingham club could become the laughing stock of English football.

However Sherwood’s displays in front of the media may actually prove to be an advantage in a relegation battle. It could divert pressure away from underperforming players, and give Villa a “wildcard” club persona that could unnerve sides around them. At the very least, Sherwood’s antics will at least provide Villa fans with some entertainment, something which has been painfully lacking at Villa Park this season.

Given all this, it would seem that Sherwood’s strengths greatly outweigh his weaknesses in being the new Aston Villa management, and considering the dearth of other options available, Sherwood’s appointment should surely be seen as much more than just a big gamble.